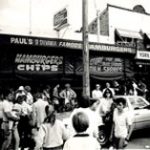 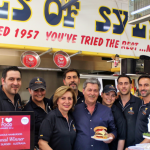 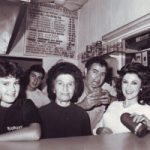 It all started back in 1957, when Paul and Katina Zerefos, purchased a block of land at 12 Princes Hwy, Sylvania where Paul began to build a mini market “Paul’s”, as this was long before there were any shopping centres in the area.

As the building progressed, it was under Katina’s instructions to the builders to measure 7 feet from the side wall of the building, in order to put a dividing wall, separating the work area in two.  Within the 7 foot opening, service was conducted at the front of the shop, servicing directly to the public on the street.

Hamburgers were the only product to come out of – what became known by locals as the “hole in the wall”. The first hamburger sold was a seedless bun, lightly floured on top, plenty of fresh lettuce and tomato, and of course the meat patty with onions and tomato sauce. As the business became famous and people came from all over Sydney for them, the establishment was re-named Paul’s Famous Hamburgers. As the business size increased, so did the product line, expanding the menu to old fashioned milkshakes, hot chips and Paul’s signature freshly squeezed pineapple crush.

In 1998, after 41 years in the family, Paul’s Famous Hamburgers was sold to Nick and Sandra Sinesiou. With 30 years experience in the food industry, the Sinesiou Family continued the systems, of what had become and institution. The high level of cleanliness, customer care, product quality and production line like service, was the foundation and success of the business. The takeover was such a success, that trading hours were extended as staff had been regrettably closing the door on queues of customers. Tables and chairs were also introduced giving customers the option of eating outside the premises, or continuing the Paul’s culture by walking a short distance to eat and relax facing the George’s River, under Tom Ugly’s Bridge.

So, if the 50 years of success has got you curious as to why Paul’s Famous Hamburgers are the best in Sydney, simply join the fast moving queue. We look forward to fulfilling your appetite!